Some writers have been an acquired taste for me. When I first read them it took me a while to slash my way through their impenetrable styles and enter the fragrant garden on the other side. Faulkner is one. Raymond Carver is another.

Yet while reading some others I felt at home from the get go. Pulitzer Prize winner Richard Ford is one such writer. The critically acclaimed master of the unforgettable “The Sportswriter” and “Independence Day” comes up in spades in “Multitude of Sins” (2002), a collection of sensitive short stories each equipped with a powerful search light that probes far down into the uncomfortable recesses of our souls.

The setting is Middle Class America; late 20th century. Each story is basically about a man and a woman. Sometimes there’s a third man or woman, or a fourth one. But the dyadic heartache remains the same.

And the issue, more often than not, is adultery. Not the act or process itself but mostly its aftermath. When the earthquake of quick escape subsides, meditating on the mistake is the only damage-control option left to our characters.

Three of these delicious stories are especially unforgettable.

A couple driving in their car to a dinner party they are invited to are paralyzed by a confession that the wife chooses to make, just as they are about to pull into the driveway of their host. One simple sentence and their world starts to unravel piece by piece as we sit there watching the whole episode through Ford’s liquid crystal prose. Voyeurism had never been this painful.

A man who once had an affair with a woman happens to bump into her husband in the middle of NY’s Grand Central terminal. Ford treats us to a smorgasbord of emotions including hesitation, regret, humiliation, anger, and a few more until that simple moment looms into a perfect microcosm of everything that went sideways and not quite right in our character’s life.

In yet another story two married real estate agents start an adulterous affair until familiarity breeds contempt and a lot more. It begs to be made into a movie by Coen Brothers.

If you like short stories you’ll carry this volume everywhere you go until it’s finished. Addictive like smoked almonds. Highly recommended. 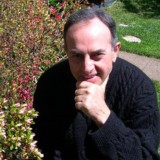